A prostate cancer survivor exercises to stay physically and mentally fit; ‘when he gets in the pool, he’s in the zone’

From the Wall Street Journal | http://on.wsj.com/2cnatW7 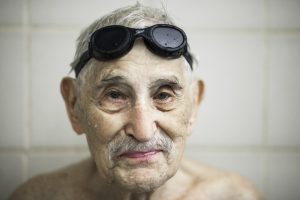 Leo Shliselberg has been swimming regularly for the past 20 years. Photo: Benjamin Hoste for The Wall Street Journal

When Leo Shliselberg was diagnosed with prostate cancer in 2001, he requested that his radiation appointments be scheduled around his daily swim routine. “The first day I had radiation, I went out and walked 2 miles afterward to prove to myself I was still strong,” says Mr. Shliselberg, 90.

He has undergone 45 rounds of radiation and never missed a day in the pool due to treatment. He still has small traces of cancer in his body and takes an oral chemotherapy drug daily.

Mr. Shliselberg started his regular workout routine only after he retired in 1991 after 20 years at New York Telephone Co., checking wires and connections from 8 a.m. to 9 p.m. “When I retired, I needed to find purpose. I had to keep working my mind and body, because if you don’t use it, as they say, you lose it.”

This past March, he and his wife, Rita, 85, moved to an apartment at RiverWalk, an independent senior residence on the campus of the Hebrew Home in Riverdale, N.Y. The campus has an indoor pool a five-minute walk from his apartment, so he can swim year round.

“Leo prides himself on how great of a shape he’s in,” says David Nanus, chief of the division of hematology and medical oncology at Weill Cornell Medical College in New York City. Dr. Nanus has been taking care of Mr. Shliselberg since 2005 and sees him every six months. “There is no question in my mind that swimming has contributed to how extremely well he is doing and his positive attitude.”

Even on days when he feels tired, Mr. Shliselberg says he gets re-energized just thinking about swimming. “You have to make an effort in life if we want to live the fullest life. Time in the pool really isn’t that much effort.”

Mr. Shliselberg is at the pool like clockwork, five days a week. “He’s always the first one waiting at the door just before we open at 1 p.m.,” says Ivan Pineiro, a lifeguard at the pool. “He’ll chat when he first comes in, but when he gets in the pool, he is in the zone.”

“I like doing my workout the first chance I get so I don’t have any excuse,” Mr. Shliselberg says. “I build my schedule around when the pool opens.” During radiation, on days when he felt tired or sick, he says he would take his swim slowly and take breaks between laps.

He swims 21 laps in the 36-foot-long pool, always breaststroke. It usually takes him about an hour. He prefers breaststroke because he says it feels like he’s stretching out his body as he swims and he finds it easier to breathe. While many people use their workout to socialize or for camaraderie, Mr. Shliselberg says he prefers to work out on his own.

“When I am alone in the pool, it is my time to think,” he says. Mr. Shliselberg is Jewish and recites readings from the Book of Moses in his head to keep from getting bored. He says he dedicates a lap to his wife and each of his four children and seven grandchildren.

Mr. Shliselberg’s eating habits changed dramatically in March, when he was diagnosed as prediabetic with high cholesterol. His doctor ordered him to curb his sweet tooth.

“I used to eat a half-gallon of ice cream each night and a chocolate bar a day,” he says. He quit his sugary indulgences cold turkey and now sticks to a low-fat diet. He eats Special K cereal with milk, whole-grain toast and coffee for breakfast and he always drinks a glass of milk and a glass of tomato juice. Twice a week he’ll add an egg.

Lunch is usually low-fat cottage cheese, apple sauce and tomato soup. Sometimes he’ll make a sandwich of lox, onion, tomato and farmer’s cheese. When he is hungry, he’ll eat roast chicken or fish for dinner. Most nights he has a light meal of applesauce and cottage cheese or a lox sandwich. He always has a cup of tea in the evening.

Part of the appeal to Mr. Shliselberg of swimming is that it requires minimal gear. “Ear plugs, goggles and swim trunks are all I need,” he says.

About the Author: Barry/Efryim Shore

Check out www.BarryShore.com Efryim attributes his positive attitude to a conversation he had with his aunt at the age of seven. Efryim, originally from Boston, was looking out the window on a stormy New England day. It was cold and rainy and Efryim could think of many reasons to be upset. “What a horrible day,” he exclaimed. Just then his aunt came up behind him and chided him for seeing the negative. “What are you talking about?” she asked. “The rain and snow are so good for the world. It helps the plants to grow, it fills the river basins, and gives us water to drink. We can’t survive without rain!” “That was a seminal moment in my life,” he recalls. “My eyes were different from then on. I realized that I had a choice whether to see the good in a situation, or to focus on the opposite. Sometimes in the midst of a very hot or rainy day you can find yourself beginning to grumble and complain. Stop yourself right before the negative words leave your mouth and say, ‘Thank God I’m alive; I’m walking; I can smile!’” Efryim’s signature on his email says www but it isn’t followed by a domain name. Instead he gives new definition to the acronym – “What a Wonderful World!” As far as he’s concerned, it truly is.